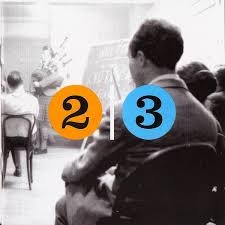 Info from Publisher: Let the Folk-a-bration continue! The next two volumes of a four volume series. In a specially priced two CD set, 42 folk music classics are given a good going over by notable recording artists and the school's longtime music instructors, each breathing new life into timeless songs. And as testament to the durability of these tunes, they stand up to wide variety of genre-busting experiments and instrumental and vocal chicanery. The songs on The Old Town School of Folk Music Songbook: Volumes Two and Three were, in fact, drawn from the the Old Town School's 50th Anniversary Songbook (now out of Print). It was a collection of ballads, love songs, sea chanties, pop songs, work songs, old-time religious tunes, and lots of other great music that has found its way into the Old Town School curriculum. The performances on Volumes Two and Three range from the ambient/electro treatment of "Simple Gifts" by Chicago's The Zincs, to the heart-breakingly spare take on Tom Paxton's "Last Thing On My Mind" by Kelly Hogan and Scott Ligon. Other artists featured include James Hand, Marvin Etziiono (Lone Justice), Nora O'Connor, Amy Allison (daughter of Mose Allison), The Lost Bayou Ramblers, Foghorn Stringband, and Amy Nelson and Cathy Guthrie (Folk Uke, daughters of Willie Nelson and Arlo Guthrie). A good number of the recordings are by Old Town School instructors -  performers themselves with decades of teaching experience. Highlights of their cuts include Cat Edgerton's "Water Is Wide" and Scott Besaw's "Nine Pound Hammer". A sumptuous, 20-page booklet gives a detailed history of each song, written by Old Town School folklorist (and teacher) Paul Tyler.

"Songbook Vol. 2 and 3 is chock-full of renditions of classic songs that are part of the American song DNA that will please many an ear. If this is how good the sequel is, then Volumes 4 & 5 had darn well better be in the works. Highly recommended."
-zooglobble.com

"The interpretations of these classics are powerful, and this collection presents a nice way to visit eras long-since passed, when life (and music) seemed simpler."
-Las Vegas City Life

" ... continues the effort of Chicago's venerable academy to record and reinterpret just about every song you could imagine singing around a campfire. And a few that you may not; this is a veritable treasure trove of blues, gospel, Stephen Foster, cowboy classics, sea chanteys, country favorites, work songs and other traditional staples. It's a great deal."
- LA.com

"Most of the 42 tracks invite singalongs, making this the ideal soundtrack for your next at-home hootenanny."
-Amazon.com