Music Principles for the Skeptical Guitarist: Volume One: The Big Picture 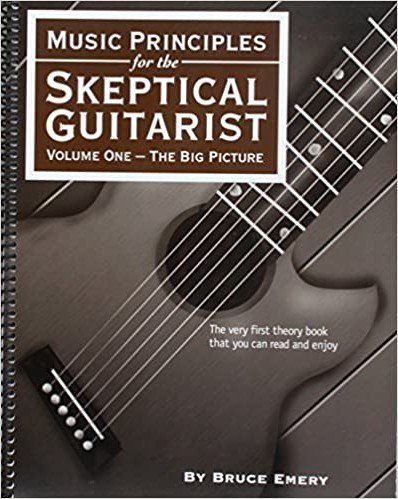 In the First Approach, we see how major and minor chords are grouped into keys (chord families) according to the 1 - 4 - 5 and C-A-G-E-D Systems, with examples from popular music. Topics include the Big Fifteen chords, using the capo, finding the starting note, tuning, the Rhythm Changes and secondary dominant chords.

In the Second Approach, we start over from the beginning and fill in the details of how to use Major Scales to generate the five C-A-G-E-D chord families and how all 12 key are related through the Circle of Fifths, the cosmic nutshell of the entire musical universe. Topics include transposing from key to key, dominant seventh chords, triad spellings, the jazz turnaround, back cycling through the Circle, and relative minor keys. Plenty of examples.

The Chromatic scale
Layout on the neck
The Major scale
The Key of C
Scale degrees and other keys
The Key of G
Worksheet for Major scales
Traveling by Fifths
Major scale summary
The flat keys
The fretboard and the keyboard
Major scale exercises
Back to Chord Families
The C Harmonized Diatonic scale
Major chords versus Minor chords
Four combinations of Thirds Other
Chord Families
Worksheets for Chord Families
C-A-G-E-D Chord Family summary Example: "Morning Has Broken"
Full Chord Family summary
Transposition chart
Details of the 1-4-5 relationship
The Dominant 7th chord
Overlapping Chord Families
Chord substitutions
Triad spellings
My Bio
The Circle of Fifths
More on Secondary Dominants
Examples in the Key of C
Down by a 5th = up by a 4th
Backcycling through all the keys
C-A-G-E-D Chord Family examples
Mixing in the Minor chords
The Jazz Turnaround
"Morning Has Broken" again
Yuletide Backcycling in a the C-A-G-E-D keys Starting notes
Shortcuts in terminology
The 4th of the 4th
Major 7th and Minor 7th chords
Minor keys
C Major versus A Minor
Three kinds of Minor scales
Carols in the Keys of Am, Dm, and Em
Appendix 1: Why the number "five"?
Appendix 2: Key signatures
Volume One in a nutshell
One last quiz
Old Town School Music Store
4544 N Lincoln Ave.
Chicago, IL 60625


Order online or give us a call,
free Continental US shipping over $75!