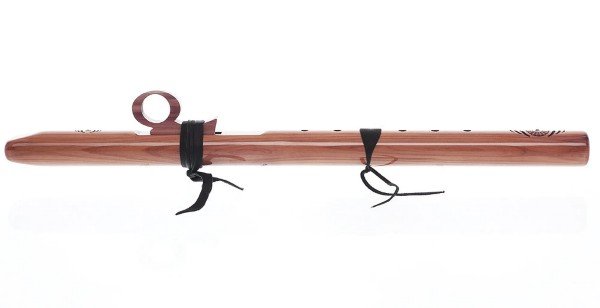 Pickup hours:
11am-5pm CST Mon-Sat
Free US shipping on all orders over $75!


Please give us a call if you're
interested in stopping by
to try out a specific instrument!

In the world of music there has been a revival of tuning instruments to lower frequencies of sound vibration.  Until recently, most musical instruments have been tuned so that the “A” note (of the middle octave on a piano) is tuned to 440Hz (Hz = cycles per second).  This is known as Concert Pitch and was established as a standard at the beginning of the 20th century.

Our EarthTone© wooden flutes use a 432Hz frequency for the “A” note and all other notes are aligned accordingly.  When played alongside flutes that are tuned to the frequency of 440Hz, the 432Hz tonal difference is very subtle.  The 8Hz of tonal difference are seemingly slight in degree but can be perceptibly different when experiencing the feeling of the music we hear.   Much like the subtle inflection of the human voice that can project a subtle variation in feelings, an instrument using a slight change in frequency can alter the feeling quality of the music being played.
This flute features Rainbow Moonstone inlaid cabochons, a fetish symbolizing the circle of life, and it is engraved with a geometric pattern representing the 432Hz frequency.
The flute is tuned in the key of "A" minor and can also be played in the relative major diatonic scale in the key of "C".  It is a 6-hole flute, we cover the 3rd hole from the top of the flute (known as the 6th hole) with a leather tie, giving the option to use it as a 6-hole or a 5-hole flute.
The term “good vibes” has been used to describe a positive experience. It is slang for good vibrations or feelings.  Vibrations have a great influence on us and it can be said that all aspects of this physical world are filled with vibrations.  On a daily basis, vibrations are not easily seen but rather felt.   When listening to music, a dialog or just normal conversation the intensity or calmness of the sound vibration has an effect on what we perceive or feel.  Aggressive music can agitate us, a calm voice can sooth us.  These are all aspects of sound vibration and they can be measured as well as visualized.

An instrument known as a CymaScope can project the physical geometric patterns of any specific vibration.  By connecting the instrument to a vessel of liquid or a solid medium such as sand on a plate, the vibration of a specific frequency will create consistent unique geometric shapes.  Internet searches for “CymaScope 432Hz” will give many options to see the instrument creating the various patterns.

The claims and potential benefits cannot all be scientifically proven.  We suggest letting your personal experience be the deciding factor in the choice of tunings.